Hey! I am first heading line feel free to change me

Limited Edition 20th Anniversary Vinyl, pressed on clear vinyl, limited to 1,000 copies (700 copies in Australia and 300 in the US)
Copies are not numbered, rather embossing on back of sleeve states “Limited Edition of 1,000”

Comes with a digital download card for a digital version of this release. 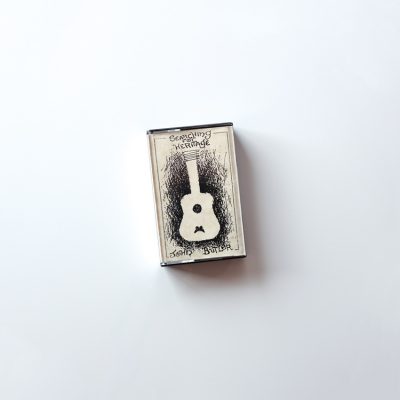 When I was a young boy living in rural south Western Australia, in a small town called Pinjarra, we’d often go up to the ‘big smoke’ and spend a day in Freo. Anybody who’s been to Freo knows how vibrant the streets are. I was really taken by the buskers, there was something really romantic and gypsy-like about what they were doing. They gave the whole place an air of wonder. Fast forward years later & during my first year of my arts degree at Curtin University, I discovered something called open tuning. It completely changed my life.

Apart from listening to a mongrel set of music genres– bands like RATM, Soundgarden, Beastie Boys, Hendrix, Janes Addiction, The Cure–I’d always really loved traditional Celtic Music & Indian music. Much of this style of music was played in open tuning, and when I discovered the connection my fingers and mind went wild. I started writing mountains of instrumentals inspired by these flavours and mustered up the courage to borrow my friend’s battery-powered amp and see if I could hold my own at the mecca of busking in Fremantle – The Fremantle Markets. What started that day quickly turned into a tsunami of encouragement, momentum and birthed a crazy idea that maybe I could pay the rent and do something I loved at the same time. I was addicted and spent every weekend, at the markets from 9am until closing time.

I was making $30 an hour, which to me, was like being a millionaire. My last paying job was $9 an hour, picking nectarines, apples & peaches in Dwellingup. About 2 months into my busking career a woman came up to me and asked me if I had any recordings. I said I didn’t and didn’t think much of it, other than that it might be a good idea one day. A month later, she came and asked again. This time, I said, “Yeah, yeah, I’m gonna, it’s gonna happen, I just gotta get around to it.” Three months later she again came to my pitch and asked me the same question, but this time, when I gave her the same answers I did before, she walked away, shaking her head.

This was one of the most pivotal moments in my whole career. Opportunity knocks on your door and “Yeah, I’m gonna get around to it” just doesn’t cut it. It was a fork in the road moment and I knew it. I mean hell, I was going to uni to get my fine arts & teaching degree with the hope of being able to be an artist and still pay the rent. I was busking earning $30-$40 an hour and being asked for an album I didn’t have. The dream was coming true in real time. If this wasn’t the moment to act then there never was one.

The next day I contacted a fellow musician, Sharon McDonald, and asked if she could help me record something. We made a deal: I’d trade a pile of my art supplies in return for a very simple, raw but honest recording; this recording became SEARCHING FOR HERITAGE. I used these instrumentals in a way, to find my own cultural identity, drawing from my Irish & Bulgarian roots. This was my bastardised-mongrel take on connecting to my heritage and becoming a romanticized version of the Gypsy-Buskers I watched as kid in Freo.